I have a new obsession. Oh, that’s weird, Kayla. You never become fixated on new obsessions leaving the last ones behind. First of all, shut up. Secondly, this one is a good obsession: my budget. And also kind of Dave Ramsey.

Read: Why a Praying Mantis is the Pet for You

If you are familiar with ole Dave, you know that he has some very strong opinions about personal finances. 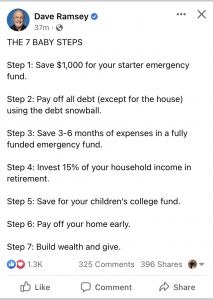 His “baby steps” have helped thousands of families pay off millions of dollars in debt and achieve financial freedom. He recommends paying off debt using a “debt snowball”, setting a zero budget each month, using the envelope system, and paying with cash whenever possible. I was first introduced to Dave Ramsey when I was a long-term sub in a business class back right after college. It honestly shaped a lot of my financial ideals.

But what changed recently?

I realized how broke we were, that’s what. We live in California and things are only getting more expensive. At this rate, we will never be able to buy a home. And like, Kai and I are both college-educated, responsible adults. I’m in my forever career job. we make decent enough money. Why does it seem like our budget is so tight?

Well, it turns out that I was using my budget as an expense tracker, not an expense planner. I would sit down a couple of times a month and tally up our expenses and it would go something like this:

Me: Kai look at how much money we spent. hoo boy it’s a doozy.

Kai: Ouch. We should stop spending so much money.

Me: Man, totally. Okay, okay we’ll do better next month.

And like, we were never getting ahead. We tried to keep our expenses low – when we thought about it. We didn’t have that much debt – compared to other people. We don’t have credit cards – but we pulled out of savings every single month. Then we’d put money back into savings only to pull it out again next month.

This was not sustainable. 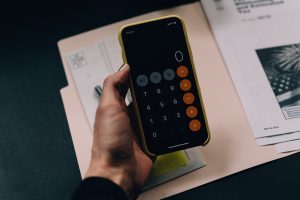 So I sat down with my budget and looked at it again. I really, really looked at it this time. I saw, maybe for the first time, how irresponsible we truly were being with our money. All this time I thought I was being a good steward, but in fact, I was burying my talents in the ground, when I should have been increasing them.

I returned to my financial roots as it were – I reconsulted the Ramsey method. I tweaked some numbers, I moved some things around, and we contacted a financial advisor. Now, three months later, we have much better control of our finances. we tell each dollar what to do and have a plan for our finances going forward. We know exactly what we can and cannot afford. We’re the ones in charge of our money, not the other way around.

We’ve already started saving for Christmas for crying out loud. This is great.

But the more I look at Dave Ramsey, the more I realize that while he is incredibly smart and his methods do definitely work, he isn’t perfect. 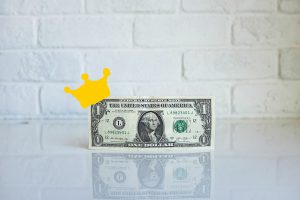 His advice isn’t always spot on. For one thing, cash can no longer be king. I still take out large amounts of cash each month to help curb impulse spending, and it helps. But overall, so much of our financial life is online that cash just straight up doesn’t work. And because of the Covid and the coin shortage (supposedly), some places aren’t even taking cash anymore.

Dave also suggests that you don’t need a credit score.

He calls it an “I love debt” score which – I mean maybe, but you need credit to buy things like houses and cars. Some jobs will even check your credit history. The credit system might suck (it totally does), but so do taxes and we can’t just opt out because we don’t agree with them.

Also, and this is on the pettier side, he’s kind of mean? He has a podcast (used to be a radio show) where callers ask him and his daughter for advice. Sometimes people are very stupid and he treats them as such. This is very funny. But sometimes people are genuinely in need of help and he can be so unnecessarily sarcastic and dismissive… I’m probably just whining now, but I feel like we could all stand to be a bit kinder and his attitude is grating sometimes.

What am I getting at here? If you know me, you know I have some problematic faves. 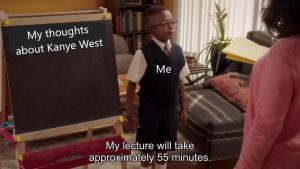 I have an unnatural fondness for Kanye, despite him being quite literally unhinged and acting a fool. Please Kanye, just leave Kim alone and go to therapy. Your custody issues would be so much easier if you would get healthy. Remember when you got saved? Remember that? Maybe you could start acting like that was genuine instead of being crazy all the time. Please Kanye. Plz.

Dave Ramsey isn’t problematic in the sense that he’s been canceled. His company has made some questionable decisions regarding hiring and firing practices, but that doesn’t seem to be a real issue for most of his followers. What I find most problematic about him is the fact that his financial advice has not evolved for nearly 30 years. His advice, while a fantastic starting point, should really be revised and updated to match the current economic situation. Buying a house is infinitely more difficult today than it was in 1992 when he started.

Imma still keep my little envelopes though. Ramsey-ish for life.

P.s. if you want to nerd out about budgets and spreadsheets, hit me up! I’m always down to compare notes and exchange advice. 🙂

One thought on “Dave Ramsey, My Problematic Financial Fave”