HAPPY 2021! The world is crazy, right? We’re all spinning on an endless carousel of insanity and nobody will stop it even for JUST A SECOND SO I CAN GET A DANG FUNNEL CAKE but what are you going to do. I decided that what I am going to do is ignore everything like it’s my job (it most certainly is not) and write a part two to the most wildly popular post on my blog, Are You There Blippi? It’s Me, and I Hate You.

Seriously y’all, last month, my blog had over 4,000 hits. This is not a flex, because 3800 of those hits were just to the dang Blippi post. Not any of my well constructed, meaningful posts, not even any of my solid and perfect and should be going viral humorous posts.

It’s the dang noncommital Blippi post where I talk about how weirdly in shape he is. This is my legacy. My mother is so proud. I even had someone write their own post in which they quoted me, called me half-hearted (fair enough), and then proceeded to compare Blippi with Trump’s America. I really hope he stretched before that reach, honestly. (Also, don’t @ me about that article. I read it, he makes some good points.)

It’s time to revisit my feelings on the Blippi. 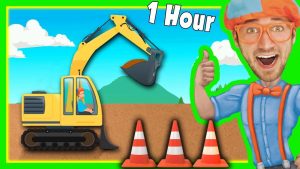 First of all, yes, I have seen almost every video on his channel. My older son is now 5, my youngest is 1, and we are in the middle of a dang pandemic so all my kids do is watch tv. Don’t go calling CPS or anything, we play outside and I even attempt Pinterest worthy crafts about twice a month. They are always more work than they’re worth, as my five-year-old has the attention span of, well, a five-year-old. Shout out to my son’s preschool for still being able to have in-person care for me three times a week so I get at least some reprieve from “MAMA WATCH THIS” about 2304876435872603456 times a day.

But so now, I get to watch copious amounts of Blippi. Does it sink or float? I GUESS WE’RE GONNA FIND OUT, HUH. I want to be fair – Blippi has improved somewhat. The Snowflake scavenger hunt? Actually pretty good. He thanked the people he worked with, he learned new skills, he played with kids, he taught us some things. He was grateful for the (spoiler alert) snowman craft that was given to him, ostensibly by the camera operator. I was pretty okay with that one. 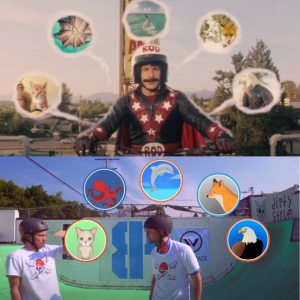 But now that I’ve seen so many of his videos, I have a whole new host of issues – Blippi makes jokes that I find genuinely funny?? Y’all ever seen Hot Rod? You know the part where he calls on the souls of the Animal Kingdom? Now watch Blippi learn skateboarding with Shaun White (skip to about 5:45). This is real and I took the screenshot myself. I made my husband pull up the Hot Rod clip because I didn’t believe it at first. GOLDEN.

And you know what else? This man is a certified forklift operator. No seriously. I don’t have proof (I tried) but watch this video and tell me Blippi has not been through OSHA training. This man knows what he’s doing.

Now, I know what you came for. As has been said, like a bazillion times in the comments of the other post, Blippi is a US Air Force veteran. I know, our very own Mr. Rogers. (btw, Mr. Rogers was not a veteran. The more you know.) I know a lot of veterans my age. Okay, I know some veterans my age. Maybe like two veterans my age. My point is that like, cool? It doesn’t make me feel any more charitable about his stupid goofy run or his absolutely manic little giggle. And I’m not allowed to be this mean to Blippi in front of my kids, in case you were afraid I was like, ruining their fun or something. Someday they’ll read my blog and their dreams will be crushed, but I have a few good years before then.

Read: 3 Reasons to Cheap out on Your Kid’s Birthday Party

Also yes, we know about the defecation video. No, you can’t find it online anywhere, and yes, he pooped on his naked friend. It’s really freaking weird, but who among us hasn’t ever done something completely disgusting and tasteless and put it out on the internet for everyone to see? Yes, Stevin John (Blippi’s real name) had a serious misstep once a long time ago. Y’all can stop telling me about it in the comments. It’s real bad, but it’s gone now, thanks to the superpower of lawyers. Crap happens. 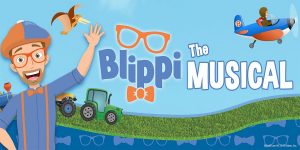 There is also the Blippi the Musical scandal, and the extreme amount of merchandising, but those aren’t any different to me than the commoditizing of children’s entertainment as a whole. Looking at you, Disney, who tried to sell us a $20.00 Forky, who is literally TRASH. So here I am, two and a half years later, still feeling largely ambiguous about Blippi. I have warmed to him somewhat, though I do get the heebie-jeebies every time my child asks me to spend $25.00 on a sink-or-float kit at Target.

I’ll never fully understand why I feel so weird about Blippi I think, but for now, he is a pleasant diversion for my kids in an awful time for all of us. Can’t fault a guy for putting out consistent content for my home-bound kids. At least he isn’t Ryan’s Toy Reviews, which I will someday give my feelings about once I can talk about him calmly. (That kid makes me sad, and his parents make me mad, but I digress.)

Anyway here’s to hoping that 2021 is better than 2020, even when the first week of it seems even more bonkers than expected. Someday I’ll get to let my kids tumble around inside a germ-infested play place and enjoy my chicken strips in peace!