Today’s professional nerd is a competitive gamer and twitch streamer: tkgodpling! He recently won the Geico Gaming Tekken 7 Championship and streams on Twitch.

You can check him out on Twitter and Twitch @tkgodpling

1. How did you get started in professional gaming? When did you know this was something you wanted to do full time?

I got started in 2014. I was 18 at the time and before then I was like a full-time online warrior. I used to watch tournaments and always thought it would be cool to compete one day. Luckily there was a tournament nearby and I decided to go and from there that’s kinda where my competitive gaming started. I did pretty well for it being my first tournament and became sponsored soon after. Once I started traveling and making money by doing what I love is when I decided I wanted to take this seriously.

2. As a competitive gamer, what do you spend most of your time doing? How do you prepare for competitions?

I spend a lot of time watching, practicing, and trying my best to stay in shape for tournaments. I stream a lot so that’s usually enough practice for me but when I am getting ready for a big tournament I actually take a break and play other games like league of legends

3. You recently won an amazing trophy, tell me about that! 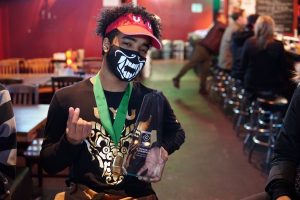 Ahh yes I won the Geico Gaming Tekken 7 Championship! So this was a year-long tour with tournaments held online every month leading up to the finals which were held offline in San Francisco. The monthly tournaments were chances to get points and even had a nice 1k prize pot for first place. But back to the trophy; I ended up winning the tournament staying in winners side and using my two main characters Ling Xiaoyu and Lei Wulong. It was one of my biggest tournament wins and still can’t believe I won. It was also my last big tournament under my old sponsor UYU

4. What are some common misconceptions people have when you tell them what you do for a living?

Hmm I’m not too sure lol I don’t tell many people what I do. My parents are fully supportive and often go around telling their friends what I do but I always try to brush it off

5. Describe the community that is involved with what you do. Were you surprised by them at all? 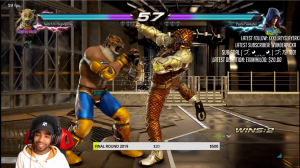 So the Tekken community is full of all kinds of personalities. I surround myself with a few people and we are very supportive and want the best for each other in esports.

6. What are some things you would tell an aspiring competitive gamer?

I would tell an aspiring gamer to keep at what they are doing and try to be the best at it! Competitive gaming can be tough and there’s always someone that is better but try to use that as a way to push yourself to the top and don’t give up!

Don’t forget to check out our previous installments of professional nerds!

Anime out of Context Podcast