This week in professional nerds – a librarian and graphic novel/manga/comic book advocate Shauna Darbyshire. She is doing awesome work in the sphere of literature and helping people understand the relevance and importance of books previously seen as inferior. I am so blown away by what she is doing and I am 100% on board with her cause. I know you’ll love what she has to say! If you want to connect with her, all her info is at the end of the post.

So here we go!

1. You are, in your own words, “an advocate for the versatility of comics, manga, and graphic novels and their validity as a format”. Can you elaborate on that? Why do you believe this is so important?

Comics are something I am so passionate about because I see their immense potential and how they are so often misunderstood. Many people still have very limited perceptions of what a comic can be- they think of superheroes, newspaper comics, or fantasy and sci-fi stories. There certainly are tons of these types of comics out there, but comics are a format, not a genre. 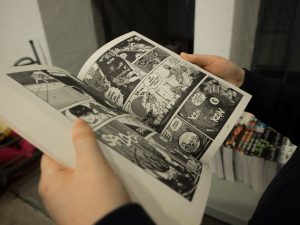 I also see comics and cartoons as a very powerful and underutilized way of sharing information and stories. As Chris Riddell says in the introduction of Art Matters:

When wise words have visuals added to them, they seem to travel further online, like paper aeroplanes catching on an updraught.

2. Describe some of the projects you have been involved in to help achieve that legitimacy.

This year I’ve been presenting at conferences, conventions, classrooms and library tours about the versatility of comics and their legitimacy as forms of literature. It started with a proposal for the Alberta Library Conference in Jasper, which was accepted- I submitted it on a bit of a whim, but then it was accepted and I realized I am going to present this in front of a ton of people?! I worked really hard on my public speaking skills (an ongoing endeavour!) and I’m happy to say that I had a great time presenting and got lots of awesome feedback.

Since then I’ve created various different versions of my original conference session and tailored my presentation to fit a variety of audiences. I greatly enjoy sharing my passion for comics, graphic novels, and manga with students, teachers, college classes, and the general public. I even had the opportunity to present at the Edmonton Comic Expo, which is a big yearly geek convention that I cosplay at!

3. What kind of challenges are you up against with this type of advocacy? Do you encounter much resistance?

Sadly there is a prevailing notion lingering in the minds of many parents, teachers, and people in general, that comics are lesser, or kid stuff, that they are not real books, not literature… this is so untrue and it drives me bonkers because I’ve seen time and time again how comics can be just as nuanced and literary as any novel, and can be vital tools in developing a love of reading. Why is it that when we add sequential art to a text it is perceived as innately less literary? 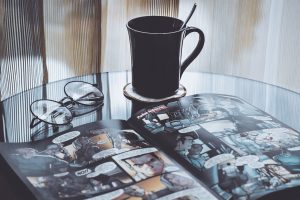 Comics and manga are also targeted often for challenges and censorship- while comics are no more or less inherently risqué than any other format, the bold visuals can indeed be used for striking and provocative means. It’s easy for people to open to one page and say “look at this (violence, nudity, etc.)!”. As with any book, though, I encourage people to look at the context and the work as a whole, and to remember that, while there’s a comic for everyone, no one comic will be a good comic for every reader!

4. Describe to me your life as a librarian and how that factors into your advocacy for non-traditional print media.

I have been working in a public library for nearly 8 years, and right now I am completing my Master of Library and Information Science online. While I’ve read comics since I was a kid, it wasn’t until I began working at the library that I began to realize the huge diversity of comics available now. More are coming out all the time. Every Wednesday we get our new titles in, and I began noticing more and more comics and graphic novels on all kinds of topics- history, war, philosophy, slice of life, travel, true crime, adolescence, coming out, cooking, etc. That’s where the inspiration for my original presentation There’s a Graphic Novel for Everyone (Yes, Even You!) came from- I wanted to get the word out! 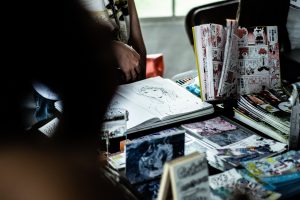 In my day to day job at the library, I love showing people comics that challenge their preconceptions of the format. It makes me so happy when someone is surprised and delighted to find a biographical comic, or a graphic novel about travel, a non-fiction manga, an indigenous comic, etc. Comics are like geodes, overlooked without thought by so many people, but hiding beautiful gems inside.

5. You mentioned AniManga; can you tell me a bit about that? What was the general reception for that program?

AniManga is a program my library runs for teens who enjoy Japanese manga and anime- we do different activities with them such as movie days, cosplay events, trivia games, etc. We now have a dedicated programming department that runs AniManga, but I had a lot of fun when I used to run it in its early days, especially because I myself am a big anime and manga nerd! As with most teen programs, it was difficult to attract the teens at first (pizza works wonders…) but in time I had a decent sized group of regulars who got to know each other and became friends.

A Mom came to talk to me after the program one day and expressed how her son was usually very shy and withdrawn- she was so thankful that he found a group that shared his interests and who he could be himself around. Moments like these are the best part of my job!

While I don’t directly run the program anymore, my coworkers often reach out to me for anime and manga recommendations to use in the program, and I am more than happy to oblige!

6. What do you think is the biggest hurdle in academia as far as anime, comics, and manga are concerned? Do you feel that mainstream acceptance of these media is attainable any time soon?

I think that people need to be open-minded and not fall back on their assumptions about comics. Comics, graphic novels, and manga are often not even considered for selection, study, review, etc. simply because of misconceptions about the format. I implore academics, writers, critics, and people in general, to see comics with fresh eyes. The time for comics is now!

I feel total joy whenever I discover that a comic is getting broader recognition. When Art Spiegelman’s MAUS received the Pulitzer Prize back in 1992, it was a huge deal for the comics format. Today comics are very much alive, and it’s exciting to see the diversity of authors, art styles, and topics being explored. Just last year Nick Drnaso’s Sabrina became the first ever graphic novel to make the longlist for the Man Booker Prize. I hope that comics will continue to explode into new endeavours- a B.C. woman recently completed her Master Thesis in comic format!

Another hurdle is that people might be intimidated from creating their own comics because they think they don’t have the artistic skills to pull it off. However, while gorgeous and detailed visuals are certainly a big part of why certain comics are amazing, comics in general don’t have to be fancy! Panels that are simple can still be effective- for example, xkcd (https://xkcd.com/) has gathered a huge following with comics that use minimalist drawings and stick figures.

I have started creating comics too- I made this one to express how I feel sometimes in my growing role of “the comic girl”:

Shauna works at a public library in Alberta, Canada. She’s a geeky fangirl, dog mom, reader, artist, and lover of all things cute and creepy.

She can be found on most social media @HideNGoShauna .

Check out her blogs here

and her presentation materials about comics here!