This weeks installment for my Professional Nerd series is an interview with Hillary Laine, a semi-professional cosplayer.

(for those of you unfamiliar with cosplay, It refers to designing and wearing costumes modeled after characters from movies, comics, games, etc.)

1. How and when did you realize that cosplaying was something you wanted to do professionally? Was that a difficult decision? 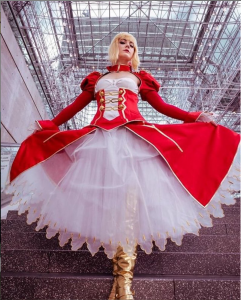 I’ve been cosplaying since I was 14 years old, so it’s been a part of my life since I could decide things for myself! I’ve been sewing professionally for the past three years or so and started to take my cosplay more seriously then as well. Cosplay is the perfect intersection for me of nerdy dressing up and happily sewing and creating beautiful pieces. I don’t consider myself a professional cosplayer, and I think most people who cosplay would agree. Cosplay is a hobby that we take to the extreme and it’s really difficult to make money doing. I think of my cosplay more like my art form, and sewing as my profession, which was the easiest decision to make.

2. How many hours a week do you dedicate to cosplay? What are those hours dedicated to specifically? (This can include interacting with fans or brands)

I spend around 20 hours each week on cosplay, and most of that is used for sewing new pieces for myself or other clients. Interacting with fans or outside brands happens largely at cons and meetups, which I try to attend once a month or so. I’m almost constantly on Instagram, and I love it when people reach out there to say hi and chat!

3. Many people have some very negative perceptions of cosplay, and specifically women who cosplay. What has been your experience with that? Do you find yourself having to defend or explain your career choice? 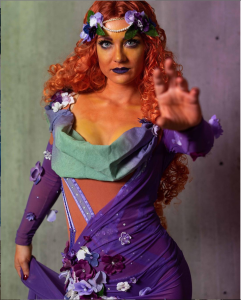 I have a very accepting friend group and family. When I said I wanted to peruse making costumes for a living, they fully support me! I currently live in NYC and grew up in the Bay Area in California, which are both very liberal hubs, and since cosplay and nerd culture has become more mainstream, I hardly ever have to explain what cosplay is anymore. The only time I was shamed for cosplay was in college when I was told to not promote my cosplay work as legitimate costume work. I did anyway, and now sew cosplay and other costumes professionally!

4. Do you find any major difference in your experience as a cosplayer and a male cosplayer’s experience? Tell me about it.

Cosplay and cosplayers come in all forms and all genders, and it’s all equally awesome. There are sexy cosplayers and armor cosplayers and everyone in between, regardless of your gender. What someone chooses to cosplay often has nothing to do with their gender- I know many female cosplayers who prefer to cosplay male characters (@goldenauriel or @mandybars) and the other way around (@princesschriscosplay), and so many nonbinary cosplayers who cosplay anything at all (@kingmalus).

5. Describe the community surrounding cosplay and fans. What were some things that surprised you when you started doing cosplay seriously?

The line between cosplay and fans is so thin. Even when I would only cosplay once or twice a year, I considered myself a cosplayer and not a fan. I think if you love nerdy things, and you dress up as those characters once in a while, you’re a cosplayer. You don’t have to create something new every week to be legitimate.

6. What were some purposeful steps you took to distinguish yourself as a legitimate cosplayer? Do you ever feel pressure to over-sexualize your image? 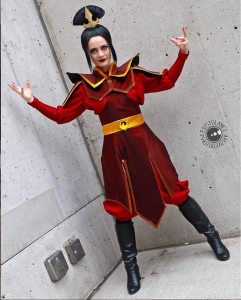 When I decided to take my cosplay seriously, I really tried to think about what types of characters and costumes I wanted to focus on. I enjoy sewing intense and intricate pieces, and always strive to use new techniques on every piece I make. I love characters with amazing plots and storylines, so if there’s a character out there that’s both interesting to look at and think about, I gravitate towards those characters. Skimpy costumes just aren’t as much fun for me to make, so I tend to not make them.

That being said, that’s just my choice. If you want to be a sexy or lewd cosplayer, do it! (hopefully not if you’re under 18 though!) It’s your body and your choice to present yourself however you want. You can cosplay with a bikini, you can cosplay with incredibly constructed and revealing armor, and you can cosplay while being dressed in a sleeping bag. Cosplay is incredible because it allows for such diverse interpretations of characters, and such deep self-expression, and I wouldn’t limit that by saying one type of cosplay is better than another.

At the end of the day, cosplay is just dressing up as a character for fun. That’s all there is to it.

Click here for last weeks installment, an interview with a production company, and click here for the first week, a review of a convention.