In case you’re unfamiliar with the term – Niche: denoting or relating to products, services, or interests that appeal to a small, specialized section of the population.

Y’all know I’m a blogger. Duh, right? You might know that I am a  former English teacher, you probably know that I have a wonderful husband and (almost) 3-year-old boy, you likely know I’m a Christian, you might even also know that I own a pet bug and that I like to play video games. Those are pretty much the basics. I know all that about myself too.

I also know that I invented a comic strip when I was in fifth grade called “The Adventures of Stick Man and Kinky Koala” (I was a very naive child I didn’t know what that meant, OKAY). And I know that in high school me and my friends had a garage band we called “In Hoc Signo” and I made the logo on MS paint. We practiced exactly two times but I did marry the bass player so there’s that.

One more thing: When I was a kid my teacher/babysitter took me to Baskin-Robbins with a coupon for smoothies but I didn’t like smoothies so I asked for a shake and it’s only as an adult that I realize she was probably on a tight budget and I, a spoiled kid, ruined her coupon. I think about that like once a month, probably.

But here’s a thing even I don’t know: What is my niche?

As a writer, every resource you find tells you the same piece of advice: find your niche. There’s all kinds of advice on how to go about that, but the bottom line is that you have to know what you’re good at. Find your area of expertise, so to speak.

So, okay. I was a teacher for 5 years (and might someday teach again, who knows). But I certainly do not feel like an expert on the topic. There’s a reason I quit, after all.

I’m a Christian, and I do write about Christian topics, but it seems like Christian lifestyle is just too vague a topic. I’m certainly not an expert in that arena, and frankly, the demand for Christian humor seems… lacking. I’ll write a post on that someday probably.

Okay so I’m a parent. Again, definitely not something I feel I have expertise in, and there are already like a bajillion other mommy bloggers and writers in that niche.

Read: An Honest review of Airline travel from my toddler

I just don’t feel like I’m super good at any of the things I could write about. I could write about being awkward all the time, but if I’m being honest I’m an adult and I do actually know how to handle my affairs without being a spaz at least 60% of the time. Plus, after too much of that it would just get sad. I’m not into being a bummer.

I’ve sort of embarked on this idea of being a humor writer, but yipes that’s a lot of pressure. 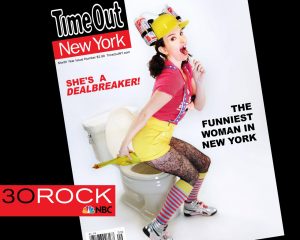 I promise you that every post I publish just doesn’t seem funny enough to me. I’m always trying to put in better jokes and references. A lot of times I don’t even publish a post at all because what I end up with is just try-hard gibberish. I cannot tell you how many times I’ve tried to shoehorn in a joke about The Greatest Showman, Logan Van Helsing. It’s not easy, y’all.

I’ve been trying to break into freelancing. I’ve done several commissions on fiverr (shameless plug plz hire me) but I’m ready for more. I know freelancers can easily make over $100 a post, which would make all the time I’m putting into it actually worth it. The problem is that I feel totally underqualified. Why on earth should someone pay me $100 to write something for them? Why should someone choose me over all the other capable writers out there? What do I have to offer that’s unique? The problem with that line of thinking is not that it’s totally wrong, because there are literally thousands of other people out there who can do what I do.

The problem with that thinking is that your competition doesn’t matter.

There will always be someone out there who is better than you at what you do. Even if you’re the absolute best, someone will eventually come and beat your record. It’s like Cherry Yoshitake, who holds the world record for most baked beans eaten with chopsticks in one minute. 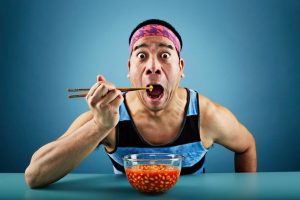 This is a real record and the number is 71. Someday, someone will come along and eat 72 beans with chopsticks in one minute, and then Mr. Yoshitake will have to engage in an old man Rocky type training montage and say “I’m too old for this” at least four (hundred) times. It will get a rotten tomatoes score of about 67%, and Cherry Yoshitake will have to hang up his chopsticks for good, but at least he passed on the tradition to the spunky upstart who used to smoke cigarettes outside his training dojo. But I digress.

Read: Hey, I want to talk about Emus

The thing about finding your niche is that it will definitely take some soul searching. It will take some time and effort to figure out what you want to declare to the world is Your Specialty™.

If you’re anything like me, you probably already kind of know what you’d be decent at. 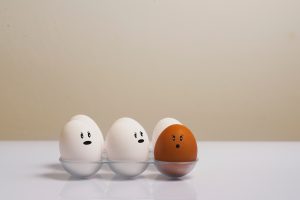 And once you figure it out, you will probably still feel like an imposter every time you put your chosen niche next to your name. Kayla Milam, Humor Writer, sounds completely overconfident to me. Even if I were to say Kayla Milam, Christian Humor Writer, it still sounds like I’m a big fat faker. But you know what? I’m not. Even if I’m not the world’s best, I will get better over time.

Sometimes the answer isn’t as simple as “I run a sky-diving school and so I can write about adrenaline junkies and funeral costs”.

Sometimes the answer to finding your niche is a simple “I think I’m pretty good at this and I like it. So I’m going with it.”

If you are wanting to start a blog, or freelance, or do any kind of creative self-promotion, you have probably already seen the “7 most lucrative niches” lists or even the “150 possible niches for successful blogs”. I definitely have and I can tell you this: humor writer, humor blog, and Christian humor are nowhere on those lists.

I’ve often second-guessed myself just on the basis that this is something only a few people are doing, and there’s no way I could be as good as they are. But now that my illusions of grandeur have subsided (at least a little), and I realize that I don’t have to be mega-successful to succeed, I am okay with marketing myself as a humor writer. Let me repeat that because I feel like it’s important:

You do not have to be mega-successful to succeed. 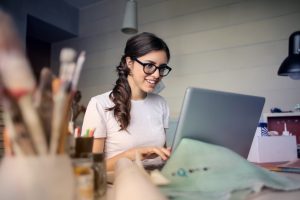 Whatever you’re into, be it raising ferrets, or playing mobile games, or crocheting tiny sweaters for lizards, there are people interested in that niche. You might not make the $5,472 a month that some bloggers claim, because you’re not writing about finance or yoga or blogging and that’s okay. That’s more than okay. The thing that will make you successful is your passion.

Read: A Lesson on First Impressions from my Dog

If you love it, and you put the work into it, it’s going to be successful, even if you never make a dime.

When I was discussing some of these concerns with my husband, I told him that I hadn’t applied for guest posts or cold pitched to any companies because I’m just so intimidated. It’s not that I don’t have the resources for how to do it right. I’ve spent enough time on Pinterest to find everything I need to get started as a freelancer and/or blogger. (side note, you’ll find my favorite freelancing resource here and a resource that helped me get started blogging seriously here). I said something along the lines of “if I put myself out there, I’ll get rejected a lot.” and you know what he said?

“Yeah. You will get rejected.” And that was it. He’s turned up missing this morning and will likely never be found, the poor dear. 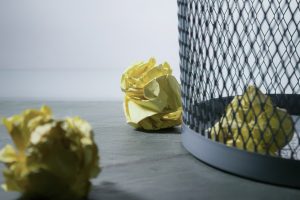 Of course that wasn’t all he said. He finished up his statement with “You will get rejected but you will also get a few bites. Nine no’s and one yes is still a yes.” Don’t get it twisted you weirdos this is just about work and nothing else.

But he’s absolutely right. I will get rejected. And it will suck. Oh well.

The worst thing that happens is a simple no, and then I move on to the next option.

Eventually, someone will hire me, and then someone else, and someone else, until I’m hired more often than not. This is how these things work, I’m told.

I’m going to start marketing myself as a comedy writer and I’m going to send out some cold pitches to companies for freelance gigs. I’m terrified, because of the huge threat of rejection and failure. But you know what? Who cares. My self-worth and more importantly my livelihood is not dependent on this risk paying off. So with a whole lot less stress, I can pursue my niche naturally.

I can pursue freelancing as a side gig because I think I’m good at it, not because I need it for validation or a paycheck. 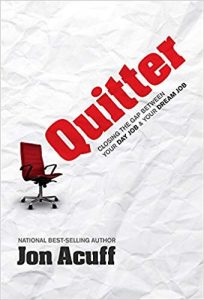 (If you want to quit your job to pursue your passion I 1000% recommend reading Quitter by Jon Acuff first. It’s not a sponsored link, it just completely set me on the right path as far as pursuing writing.)

Someday, if I keep at this, it could be a viable source of income. That would be great.

But for now, it’s as much about bettering myself as it is anything else.