I’m in Louisiana! I’m visiting my parents this week with Asher and we are having a blast. Today we went to a little water park and later this week we have plans to go to a trampoline park and an alligator farm, which is not a place where they grow alligators for harvest as you might be led to believe. 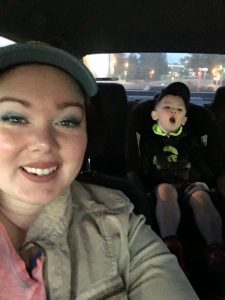 My dear sweet little 2 ½-year-old has been such a trooper – getting up at 5 am, going on two planes, missing a nap, sitting down for extended periods of time… So I figured that I would give an honest review of the travel process, start to finish, from his perspective.

We spend too much time considering how hard travel is for us the adults when airports are basically made for us. Nobody puts in weird airport art thinking “I bet this freaky impressionist birdman will be a real hit with the kids”. There are no play places in airports. Only bars, Cinnabons, and duty-free shops.

So having watched my kiddo trek through three airports and two planes yesterday, I think I can confidently ghostwrite a travel review for him. 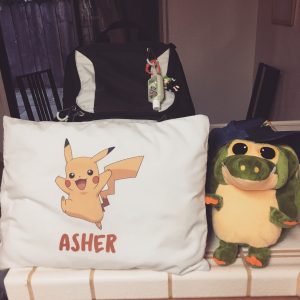 We had one really big bag and my car seat, which I thought about helping mom carry but I had my alligator backpack on and I was also carrying my milk, so I was doing my part. We waited in line which is never fun, but there was a lot to look at and it went pretty quickly. Mom handed our things over a counter after I tried to lift up our bag (what on earth has she got in there? That thing has to weigh as much as our car) and the lady made them disappear. We didn’t have to carry them anymore so that was nice. I give it a rating of not as cool as doggies, but better than cleaning up.

Read: Make your kid do that! or Are You There Blippi? It’s Me, and I Hate You

Lots of winding maze tape. Very cool, but mom wouldn’t let me run. Then she took off her shoes but made me keep mine on? They took my juice box. Not cool man, get your own. I give it a rating of yucky cereal. 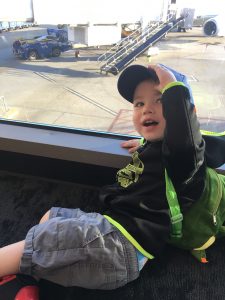 The view was nice. There were some cool planes flying in the sky and a weird bug on the other side of the glass. A baby was crying, and I ate a snack. Eventually, we got up and waited in line again (seriously grown-ups love lines) and then a lady took some paper from mom (a coloring page maybe?) and we waited in another line to get to our seat. A lady told me she liked my hat, so that was cool. I give it a rating of as good as applesauce.

I had to sit the entire time. I could not get up at all. When the plane first went up in the air it hurt my ears but mom help me chew some gum. Not very nice of the plane, but it wasn’t a big deal I guess. One time I threw my dinosaur on the ground and mom got real mad at me. 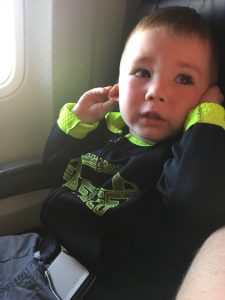 We did some coloring and mom tried to make me do some cutesy Pinterest nonsense but eventually, I just watched my iPad. I like my iPad, so that was cool, I just wish I could get up and play. The nice lady gave me cookies so I guess it wasn’t all bad. I give it a rating of nap time.

Amazing. Surpassed in greatness only by eating candy for breakfast, which mom has actually never let me do. We got off our plane and we had to climb a bunch of stairs but then we got on this thing and it was the best thing that has ever happened to me. I give it a rating of pretending to drive the car.

We got off the way cool super awesome sky train thing and had to run all the way to our next plane. Mom stopped and got a gross sandwich with bird food on the crust and no peanut butter inside. Would not recommend. I give it a rating of being in trouble at school. 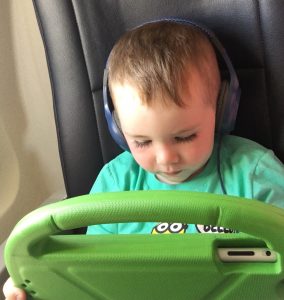 More cookies and I got to watch Minions again, which is pretty much my favorite movie. I didn’t get to finish the movie this time. I ate a banana. I give it a rating of petting my dog but she tries to lick me, which isn’t nice.

FINALLY, we made it to Mimi and Pop pop’s house. Everybody was there waiting for me and we got my car seat so I could buckle up. Great Grandma and Grandpa were there too and they are nice. Now I get to eat chocolate cereal for breakfast and Mimi lets me do whatever I want so I think I like it here. I give it a rating of going down the slide with my friends.

So there it is folks, my toddler’s review of airline travel. If you have anything you would like for him to review, let me know and I will discuss it with him. He is discerning, but looking to expand his portfolio.