Okay so, y’all know I’m not doing the real teacher thing this year. Yes, substitute teaching is valid and blah blah blah. But I’m not gonna have my own classroom and I’m not planning any curriculum, etc. This is great for me, at least for now, because it allows me the freedom to actually like the kids I spend time with. Sure I’ll miss a lot of things – calling angry parents, suffocating in piles of essays to grade, new curriculum standards every time you get used to the old ones. What I think I will miss the most? Edgar Allan Poe.

Read: The One Where I Quit my Job 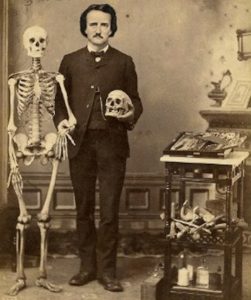 I think that my favorite thing to teach every year is The Pit and the Pendulum because I get to teach the Spanish Inquisition and the life of Poe. I have a Powerpoint thing that I made and have used a few times if you feel like checking it out. You can get the Slides here:

Intro to Pit and Pendulum

While the Spanish Inquisition is fascinating, what with its absolutely ghoulish preoccupation with human mutilation, the real treasure is poor Poe himself. I love teaching about the human torture because kids are interested and engaged when they see old-timey humans being disgusting. I love teaching about Poe because it’s almost hard to believe that his life events weren’t made up.

In case you didn’t want to look through the whole presentation, I made a handy dandy infographic about Poe for your quick knowledge gaining pleasure.

For real. All of those facts are 100% true. In fact, I didn’t even put in the whole crazy bit about his death. He was actually found in a ditch, wearing someone else’s clothes, and rambling incoherently. He died in the hospital three days later and medical professionals are still trying to figure out what happened to him. It was originally thought that he was drunk because he was a heavy drinker and gambler in his younger years. But his fiance at the time of death said that alcohol made him bloaty and gross (I’m paraphrasing here) so he didn’t even drink at all. Then people thought it was poison? But that didn’t show up in an autopsy. A popular theory is that it was rabies, y’all. Rabies.

So weird. When you look at the dude’s life, it’s no wonder that he wrote about ravens that break into your house and repetitively screech creepy words or murderers who don’t like cataracts or bricking someone into a wall just because they’re a bad neighbor. This guy had some serious life issues.

I also just want to point out that creepiness transcends old-timey English. A lot of times when I would teach an older piece, I had to stop and explain so much of the text that it was distracting. Sure, I had to do that some with Poe, but overall, he made himself clear. Use all the fancy words you want, but when you’re talking about rats chewing at the ropes that keep you bound under a giant blade, it becomes obvious what you’re getting at.

I would also like to mention a couple things that didn’t make it into my powerpoint that I find equally as interesting.

So there you have it, my favorite thing to teach. Now I’ve taught it to all of you and you didn’t even have to sit through a class of my bad jokes. You are so lucky.