My dog, Phoebe, is a beautiful creature. I was looking through my pictures recently and just… look how she’s always there ♥ 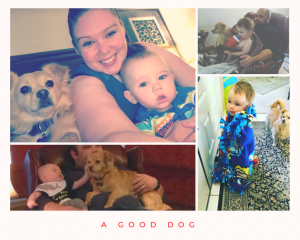 We got her from a shelter when I was pregnant and nesting and dying for a creature to care for and my wilting succulents just weren’t cutting it.

The thing is though – when she first came home with us… I was a bit less than thrilled.

See just a few months before Phoebe, we adopted our first dog, Gunther. Gunther was my baby. My absolute perfect quirky little 4-month-old baby. He was a tiny bit surly, just like me, and he jumped around on our furniture like some kind of weird goat. Like I said, perfect.

Gunther had a pretty bad case of separation anxiety though, and like so many pet parents, we decided that since we were having trouble with one dog, it was obvious that the solution was we needed two dogs. Phoebe was exactly what Kai wanted – foofy, energetic, friendly – everything Gunther was not. 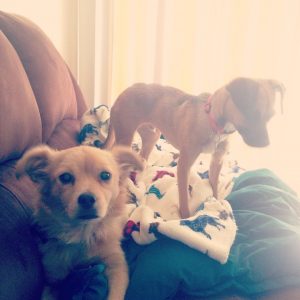 Now let me just say here that I know how silly some of this might sound because hey, they’re dogs. But to my very pregnant and hormonal self, this was a big deal.

Phoebe liked Gunther, but he wasn’t very nice. He would snap at her and get aggressive but he was small and I loved him, so we excused it. Then Gunther started biting people. Once, and we could explain it away. Twice, it was unfortunate but we can train him out of it. After the third time he charged and bit someone, it was clear that Gunther was not a happy dog. We believe he had been abused before we got him, and was just generally pretty aggressive. We tried everything we knew to do – training, treats, extra toys, no toys… but it didn’t get better.

At this point, Asher had been born and now we had a brand new baby to consider as well. A week before Christmas, Gunther bit another person at my mom’s house. We had a two-week-old baby, and we were afraid Gunther would begin to get aggressive toward the baby, though fortunately he hadn’t so far. 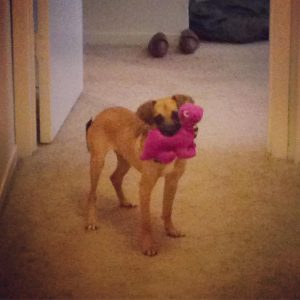 We called everyone within 100 miles that takes aggressive dogs for rehabilitation, and every single one of them was too full. nobody wanted our poor little angry dog. I sobbed for three days. Finally, we made the difficult decision to surrender him, knowing they would not re-adopt out a dog with a history of biting. I was devastated – and very angry. It was two days before Christmas, and I had to put my sweet puppy down. Every time I looked at Phoebe it was a reminder of my failure with Gunther. She was so happy and bouncy I just hated her.

Read: When Learning Patience Feels Like a Kick in the Head

Fortunately, time healed my heart, and now I couldn’t imagine life without my sweet, kind of dumb, needy Phoebe.

Because my circumstances dictated my ability to realistically judge the situation. Okay, okay, I know that this is like… ultimate cheesiness, but my opinion of Phoebe was completely clouded by my pain over Gunther.

Phoebe is an amazing and wonderful dog, but I resented her. Again, I’m probably being dramatic, but the principle is sound. 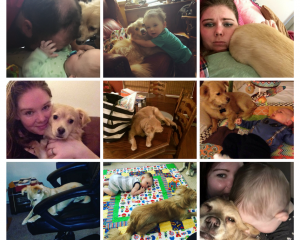 You can’t let your emotions impair your perception. That’s pretty rich coming from me because I am so emotional. But if I’ve learned anything, it’s that I’m wrong so, so much of the time.

I guess the takeaway for today is this: You can’t judge an old dog by its new cover… or something like that I guess.

6 thoughts on “A Lesson on First Impressions from my Dog”