I have a very independent toddler. In fact, I think my 2-year-old’s favorite phrase is “Asher do it!” but if you know even a little bit about the tiny monsters that we call toddlers, you know that “Asher do it!” often means “Asher attempts it, then mom or dad has to actually do it and must now also clean up the mess that Asher has made.” Especially when it comes to chores, I am not super keen on creating more work for myself.

The problem with doing everything for my kid is first that he will keep saying “Asher do it, Asher do it!” until my head starts spinning and eventually mommy’s nice, Disney princess reminder that “mommy is busy, Asher should go play” becomes mommy’s fed-the-gremlin-after-dark-and-now-I’m-going-to-murder-you-hurry-get-out-of-the-kitchen voice. More importantly though, doing everything for him isn’t teaching him anything. So my husband started giving Asher some specific and easy chores, and when I saw how effective that was, now I try to make Asher do everything he possibly can. We’re still working on his personal finance skills, but here are some things he actually does regularly, with varying degrees of success.

Want more parenting posts? Read about how much I hate Blippi or how I dealt with Mommy Guilt

7 chores your toddler can (and should) be doing themselves

This is probably the simplest way to get kids to start earning their keep. Things like lunch boxes, coats, stuffed animals, snacks, and juice cups should all be handled primarily by the one using them. Now, you as the adult will still have to keep a mental note of these things, because toddlers are very good at setting things down and forgetting about them until you have started driving away. Or maybe you have walked all the way back to the restaurant and your husband asks for his juice and now you have to walk a block back to Safeway and pray that nobody stole the sticky gross cup your kid left next to the laundry soap. It’s a distinct possibility.

Ultimately, anything that is small and easily carried that your toddler wants to bring, they can be the one that holds it. No need to make your purse weigh 312,746,923½ pounds. (Btw, That fox is Asher’s favorite thing. We have two of them, one is named Percy and one is named Kevin. 10/10 would recommend and will probably buy a third just in case)

2. Pick up after themselves

This one was never a question for me – you make the mess, you clean it up. I am consistently shocked though by mommy blogs that talk about cleaning up after their kids go to bed. Sure, there is some cleaning your toddler can’t do, but if the Little People are still strewn across the carpet like some Civil War battlefield, then bedtime waits. Personally, I sing the cleanup song at an irritatingly unnatural decibel until Asher gets the hint. It’s still about a 70/30 spread of work cleaning up, but at least it’s something.

3. Wash themselves (this includes brushing teeth)

This is definitely one that you don’t want to let them do completely on their own, but the attempt should be made. In the bathtub, they can be using a washcloth on their face or rubbing soap in their hair. For teeth brushing, we in the Milam house use the sickeningly adorable “ahh-eee-bleh” method, which is explained in this little graphic that I worked real hard on <3.

Again, you definitely need to follow-up afterward to make sure their rear end is actually clean and their teeth are actually brushed, but there is no reason why kids shouldn’t be taking personal responsibility for their own hygiene at a young age.

4. Pick out clothes, books, and even dinner veggies

Someday, I’ll write an entire post about choices for toddlers, but for now I’ll just say this: your kid will thrive if you give them appropriate choices. In the morning when you’re dressing them, let them choose between two or three shirts. If your kid is like mine, they will want to wear no shirt, so make the choice exciting. “Astronaut shirt? Look at the cool buttons! Beep boop beep!” or “Little Blue Truck? I love that book!” or “Oh man, Broccoli with cheese is my favorite!”

The key here is only giving them limited options. Standing them in front of the pantry and saying “pick a veggie” is overwhelming, and also your veggie will probably be fruit snacks. Broccoli or green beans is a good place to start.

See how I put “help” in quotes? See how I did it twice? That’s because toddlers are not actually very helpful. As sweet as it may be, I do not actually want my son to go out and “sweep up” dog poop with my nice inside broom. I do not want him to grab the knives directly out of the dishwasher and attempt to put them away for me.

What I do want though, is a child who takes ownership in the chores. When I’m cooking, I try to let him help me put cheese on things. When I’m sweeping or mopping, I let him have a broom or mop and do it with me. (This play set of cleaning supplies would be perfect and guess who just put it in her Amazon wish list)

I try to let him help with the laundry, even if that means finding all of the socks and putting them in a separate basket. It’s not much, but it is actually pretty helpful, and it makes Asher feel involved. A little patience on my part can really help him to feel like a part of what’s going on. Sometimes the socks will end up in my hair instead of the basket, and then we’re having a tickle fight and it’s adorable and now the laundry is dumped on the floor but who cares because we’re having a good time.

This is a legit, actual chore your kid can do. The way we do it is by putting the dog food into a smaller container (like this one), and then we have him go get the dog’s bowl, put two scoops of food in the bowl, and set it back where the dog eats. It’s so simple and afterward he gets a high five and points at the dog for like ten minutes “Phoebe’s eating!” yes, son. Phoebe is eating. Great job. Also this is Phoebe, she is the best.

7. Take out the trash

We have two trash cans, one regular sized one for our trash, and one smaller one for our recycling. This isn’t because we are particularly environmentally conscious, this is because recyclable goods take up a lot of trash space. And before you say “Kayla how dare you trivialize the importance of recycling!” Let me say this: first of all back up and let me live. Second, our trash collectors combine all the trash into one pile in their truck so it doesn’t actually matter anyway, you judgy Judge Reinhold.

The smaller trash bin is actually great though because it is usually full of light, non icky trash like soda cans and boxes, and Asher can carry it easily. When dad takes out the trash every night, Asher joins him with the little trash.

So there you have it. 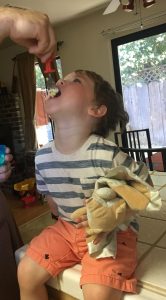 Sometimes, it isn’t reasonable or even possible to make your kids independent. Take for instance, this morning, when my husband literally had to feed our son like a baby bird to get him to eat breakfast. But that’s okay. On most days, even though my toddler still likes to run around the house in a diaper screaming “nakey boy!”, he isn’t too young (or weird) to be a part of the family chores.

Are there any chores I missed? Let me know because I am so ready to shirk some of my personal responsibilities in favor of child labor 😉

3 thoughts on “Make Your Kid Do That! (7 Chores your Toddler Should be Doing Themselves)”