It’s my birthday today, and I received the most amazing and perfect gift in the form of an internet discovery: BBC Pidgin. Apparently in August of last year, BBC launched a new digital platform to service speakers of English-based Pidgin, which is one of the most widely spoke languages in West and Central Africa.

Pidgin is an amalgamation of English and other local languages that can often allow people who don’t speak a common language to communicate because of the changing and informal nature of the vernacular. (That’s a very fancy way to say Pidgin is considered nonstandard English.) There is no standard written form of pidgin, since it is primarily an oral language.

I think it’s so incredible that BBC news has decided to service such a large population (5 million people in Nigeria alone use Pidgin English as their primary language) and they even have plans to roll out Arabic and Russian language based news programs by 2020. It’s ambitious and forward thinking and I am way on board. Actually, watch this video – maybe it’s because I am a big crybaby, but the exposure and validation these incredible people are getting from this is making me cry. Their language and identity is being legitimized in a totally fantastic way.

Now on to the Pidgin journalism

Now that you are aware of this beautiful thing, I want to share with you the literal most amazing thing I have ever experienced – this article.  Go ahead, go read it. I’ll wait here. 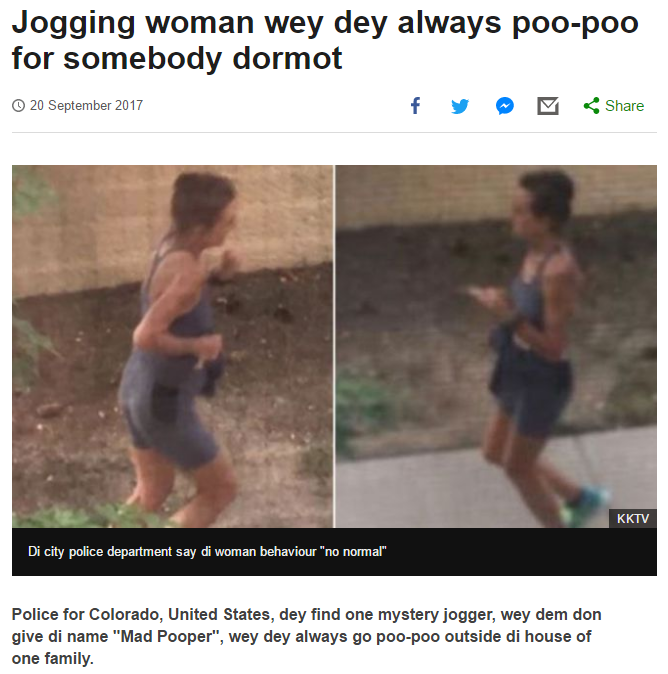 If you have a hard time getting the full scope of the article, I’ll give you a rough translation: A woman goes jogging in Colorado, and poops on someone’s doormat. This has now happened seven times. The person who owns the doormat has confronted her twice, and begged her to stop. She said she would, but she lied.. The police believe it may be a case of mental illness. She continues to poop on this doormat, just at different times of the day so they can’t be there waiting for her.

I’d like to highlight some of my favorite parts of the article:

Cathy Budde, di madam wey dey live for di house, say di woman don do am for di in front of her property like seven times for di weeks we just pass, even though public toilet no far from her house.

Like seven times, friends. Seven times Cathy Budde had to pick up a human woman’s poop off of her doormat.

“So I come outside to face di woman, I ask am ‘You dey serious? You dey poo-poo in front of all my pickin?’ She say, ‘Yes, sorry!'”

This poor homeowner is asking the so-called “Mad Pooper”, “are you really pooping right here? Right here in front of all my pickin?”

I love the world we live in. I love Pidgin English in all its colorful glory. Happy birthday to me, BBC Pidgin is now bookmarked and Favorited on my browser.