You’ve heard the debate over the Starbucks red cups, I know you have.

It’s really nothing new – Starbucks or Target or Disney or some other huge company manages to find a new way to offend Christians every year. This year, it’s the absence of snowflakes that has everyone up in arms. People are seriously offended.

No, really. They have never had “Merry Christmas” written on their cups. The cups usually have snowmen, or penguins, or reindeer or something else benign.

How dare they remove symbols that have literally nothing to do with Jesus from my overpriced latte.

Now, don’t get upset, hear me out: it’s okay to not like the cups. I think they’re boring and not a bit festive. But they are not a declaration of war on Christmas and especially not on Christians. So then why are we (Christians) so easily offended?

If someone says to us “Happy Holidays”, it is not our commission as followers of Christ to rudely and abruptly respond with “Don’t you mean Merry Christmas??” (I have actually heard a woman do this). It is not our personal crusade as born-again believers to make sure that Target, a secular company, puts out a baby Jesus in a manger. Jesus himself tells his followers that we should not be “of the world”, just as He is not of the world. This means we are set apart. We are different. So why should we expect non-Christians to adhere to our standard of living? Just as you can’t force me to stop saying “Merry Christmas”, I can’t force you to start saying it. We are not the same. 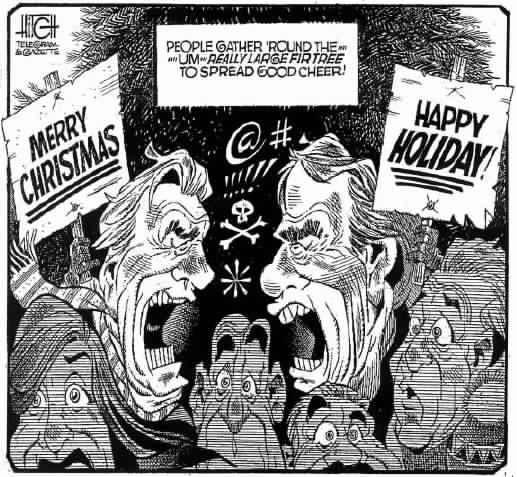 Which brings me to my real point: Why are we so petty? If someone says to us “I don’t believe in Jesus” we, as an American Christian culture, are more likely to cry out “persecution!” than to actually weep for their lost soul.  Our calling is not to “go and be offended every time someone marginalizes our beliefs”. We are called to seek out the lost who are hurting and dying and show them the love of our wonderful father.

We are called to turn the other cheek and let disagreements roll off our back.

I once watched a video that still challenges me to this day – it’s Penn Jillette, a notoriously atheistic (and God-hating) performer, telling a story about a man who gave him a Bible. Please, take 5 minutes to watch it.

I would sum it up, but I honestly do not believe I could say it any better myself. If this doesn’t cause you to reflect on your priorities, I don’t know what will. Maybe, instead of getting angry with those who don’t believe like us, we should be getting angry with ourselves because we aren’t reaching out to them with love.

I could not care less what my Starbucks cup looks like – they don’t have to live up to my standard. I do care what God thinks. And God thinks I could definitely be doing more to spread the actual truth of Christmas – a savior coming to earth to redeem us from our piteous mistakes. A God who loves us infinitely sacrificing His own son so that we, wretched sinners, could be with Him. I am far from perfect and I have a long way to go. At least for now though, I will not be spending any of my precious energy on the “Merry Christmas” vs. “Happy Holidays” debate.

6 thoughts on “All the things we get offended by”